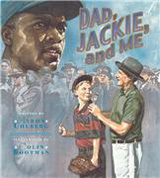 Dad, Jackie, and Me

"...an affecting tribute to Robinson, to a dedicated son and to a thoughtful, deep-feeling father. And, of course, to baseball."

—Publishers Weekly
"...genuinely affecting... Bootman's realistic, wonderfully expressive watercolor paintings capture the fashions and flavor of 1940's New York in muted brows and greens. The endpapers, an actual scrapbook of old newspaper articles about Robinson, provide a satisfying context for this ultimately upbeat, multi-dimensional story."
—Kirkus Reviews
"Bootman's lovely watercolor paintings add detail and wistful nostalgia... [readers] will appreciate the story's insightful treatment of deafness as viewed through the eyes of a child."
—School Library Journal
"It takes the young Uhlberg, narrator of the story, a while to overcome his embarrassment at his father's attempts to cheer for Robinson...but eventually Dad's devotion wins the day in a moving finale. Colin Bootman, who earned a Coretta Scott Honor Award for Almost to Freedom (2003), uses evocative watercolors rich in soft browns and lush greens to capture both the feel of the 1940s (fedora-wearing fans) and the electricity of Robinson's play."
—Booklist
"[Bootman's] rich watercolors evoke the deep shadows of summer afternoons at the ballpark and the easy camaraderie between father and son."
—The Bulletin of the Center for Children's Books