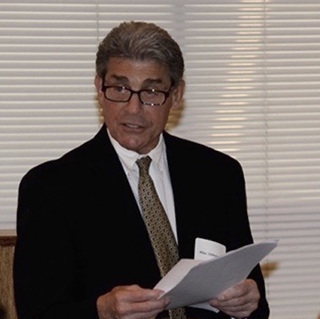 Myron Uhlberg is the award-wining and critically acclaimed author of several children’s books, including Dad, Jackie, and Me, which won the American Library Association Schneider Award, the 2006 Storytelling World Award, the International Reader’s Association Teacher’s Choice Award, the IBBY Outstanding Books for Young People with Disabilities, and the International Reading Association Teacher’s Choice Award. His children's book, A Storm Called Katrina, received starred reviews from Kirkus, Publisher's Weekly, and Booklist. His latest children's book, The Sound Of All Things, received a starred review from Kirkus. His adult memoir, Hands of my Father: A Hearing Boy, His Deaf Parents, and the Language of Love, was a Barnes & Noble Discover Book, an Amazon Best Book of the Month, and a finalist for the MS Books For a Better Life, for Inspirational Memoir. And has been optioned for a theatrical motion picture by Ken Burns, David McMahon and Sarah Burns.

Myron was featured in the Ken Burns documentary film, Jackie Robinson. He has appeared on NPR's Talk of the Nation with Neil Conan. And he was a Writer-in-Residence at Gallaudet University.

He is the first-born son of two deaf parents. His first language was ASL (American Sign Language). He attended Brandeis University in 1951 (when the school had not as yet had a graduating class) on a football scholarship, and was coached by Benny Friedman, two-time college All American, enshrined in the Pro Football Hall of Fame. Myron started on the Brandeis football team for four years, and was subsequently inducted into the Brandeis Hall of Fame.

After graduation in 1955, he served as a paratrooper in the 82nd Airborne Division. He then spent the next 40 years in the men’s fashion clothing business. In his spare time, he ran twenty marathons, including the Boston and New York marathons, four times each.

Myron is professionally affiliated with the Authors Guild, and the Society of Children's Book Writers & Illustrators.

His first book was published when he was sixty-six years old; a geriatric wonder. All who knew him asked, “What took so long?”

Myron lives with his wife, Karen, in Santa Monica, and Palm Springs, CA.